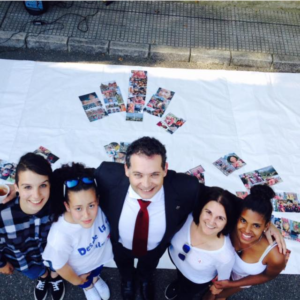 Adolfo Rivas Fernández´s professional and vital itinerary has, as the main and most important aim, a social commitment and a fight against social injustice, mainly in everything related to socio-educational  intervention.

He has been involved in socio-educational intervention since 1980. Since then, he has led organisations and social projects, carrying out his activity in the Vasque Country and Asturias. From 1980 to 1989 he was educator, teacher, manager and president in different Institutions, Centres and Social Projects in the Vasque Country. In 1989 he moves to Asturias, where he combines teaching and other jobs in the socio-educational field; High School Teacher (1989/1997), Manager in EDAE Foundation (1990/1999), Teaching Inspector for the Archbishop of Oviedo (1990-1992).

Currently he is General  Manager in Vinjoy Foundation, his great work. He has been in charge of the Foundation since September 1997, leading a process in which the entity developed from its imminent disappearance to being one  of the most important projects in socio-educational intervention in the State and the socio-educational driving force in Asturias. Tackling  comprehensive intervention of deafness,  intellectual and psychosocial impairment,  mental health problems, behaviour disorders and risk and social conflict with minors and young people, from an advanced socio-educational intervention. Assisting the intervention in the three lines directly, in a committed and innovative way, as well as professional training and research.

Having numerous socio-educational programmes, organised through its different centres and social, educational and sanitary institutes, Vinjoy Foundation is nowadays a tangible proof of the alternative which results from a community work option and from advanced socio-educational processes. The results obtained  and its evolution speak for itself..

Furthermore, as voluntary, he was the Manager of Caritas in Asturias, from November 2002 to November 2014; organisation which ended up being one of the most dynamic and important solidary operating networks in the Spanish Confederation, responding effectively in a situation of serious social and economic crisis. He also had different management positions in Cáritas Spain (General Counsellor and President of Communication and Foreign Affaires from 2008 to June 2011). His farewell, after  twelve years and having concluded all the possible headlines, came along with a widely recognition.

Since 2000 he has been a trustee in different Social  and Educational Foundations (San Feliz Foundation, Santo Tomás Foundation, Somos Solidarios Foundation, Diocesana de Asturias Foundation, Faustino Junco Foundation, San Fernando and San Ramón Foundation, Refugio de San Rogelio Foundation, among others), performing different management tasks in some of them, among many other social commitments (President of  OEIS-Asturias from 2011 to 2013, having been its promoter and vice-president (2009-2011); Social Welfare Advisory Board (2003-2014); Diocesan Pastoral Council, from 2003; Board against  Poverty and Social Exclusion in the Principality of Asturias, Consultant,  Social Outreach expert…..). In the synod of the archdiocese of Oviedo (2006-2011), he was a member of the Preparatory Committee, Coordinator of the Social Committee and Speaker/Rapporteur in one of the three presentations (the social one).

He also takes part in different studies, research articles and publications in the field of socio-educational intervention, being the author of several books, numerous articles and other publications.

He is the inventor of the Advanced Socio-educational Model of Intervention, which he applies in numerous initiatives and in which he trains many professionals in the social action field. He is the driving force, the designer and leader of several dozens of Centres and Social Projects and he undertakes broadcasting and awareness actions in social topics, with great impact on the media through interviews and articles.

In 2016 he created the Foundation Dignidad x Dignidad, with the aim of reflection training and significant action from the assistance and the radical option for human dignity.

He leads and gives numerous conferences and presentations. He is Professor in the Degree  in Social Educatio, Padre Ossó Faculty, University of Oviedo, in the subjects of Socio-educational Action in  contexts of Diversity (since 2014-2015), Director, coordinator and Professor in several Postgraduate courses (Master, Expert and Specialist), since 1992 in the University of Oviedo (Postgraduate International Centre)and in the Faculty” Padre Ossó”, Director and Professor in University Extension Courses, in Professional Certificates and in different specialised training initiatives and Practicum mentor in different Universities.

Within his activity as social activist of the approach of Community development and socio-educational intervention, he has given hundreds of conferences, numerous meetings and collaborations with different agents (all kinds of politicians, educational, social, union representatives, the police, the media, the judiciary…), mainly in Asturias, but also at a State level or even in-person actions in other countries such as Colombia, Israel/Palestina, Dominican Republic, Haití, Guatemala, El Salvador or Honduras.

During his activity, he has been given numerous and important awards and prizes. Among them there is one which stands out: “Cruz de Oficial de la Orden del Mérito Civil del Gobierno de la Nación”. (2011).

You can find out more about which cookies we are using or switch them off in settings.

This website uses cookies so that we can provide you with the best user experience possible. Cookie information is stored in your browser and performs functions such as recognising you when you return to our website and helping our team to understand which sections of the website you find most interesting and useful.

Strictly Necessary Cookie should be enabled at all times so that we can save your preferences for cookie settings.

If you disable this cookie, we will not be able to save your preferences. This means that every time you visit this website you will need to enable or disable cookies again.

This website uses Google Analytics to collect anonymous information such as the number of visitors to the site, and the most popular pages.

Please enable Strictly Necessary Cookies first so that we can save your preferences!